Reblogged from our friends at: Fuzzy Tales

Most of you know our human doesn't do, or want to do, Facebook or Twitter. But we also know the whole social networking thing can have miraculous results sometimes.

So we're hoping that one or two of you would be willing to post this via FB or Tweet it. We know the odds of success are very low, because we're in southeastern Ontario, Canada and most of you are in the U.S. or farther afield. But our human already has contacted the shelter we were adopted from, and sent emails to two other local rescue groups. The only suggestion that came back, from the shelter, was to place Toby at a barn. (This from the president of the shelter. There was no response at all from the other two groups.)

We can't take Toby to our city's shelter, he would be euthanized immediately. We don't want to see him go to a barn, either, because he seems to want human attention–certainly he wants our mom's! And our human can't, for a variety of reasons, take him in. 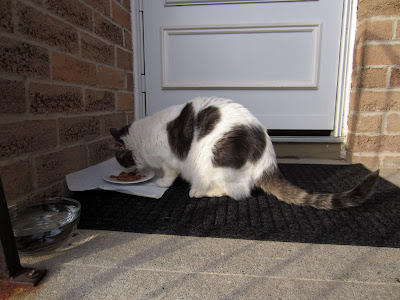 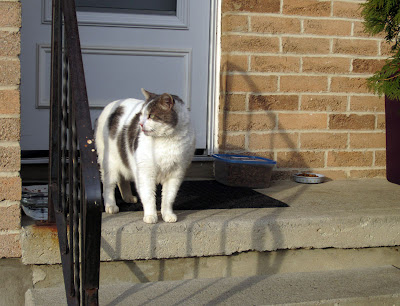 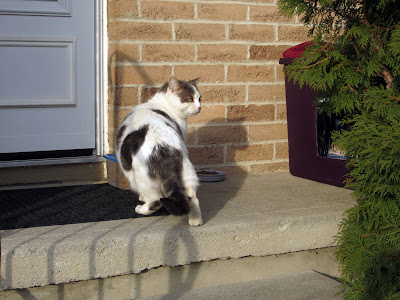 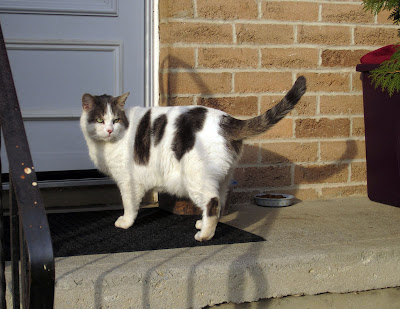 He's not old, but he's not young, either. We're guessing he's 5 or 6-ish, maybe a bit older. The mom's been feeding him for over 3 years now (4 come March, we think), though it took him a long time to trust her, and it's only been since this past winter/spring that he's been hanging around so much. (Since the former neighbour moved away–she had a cat that hung out on our step and cuddled with the mom and that deterred Toby.)

He's a lap cat, loves to cuddle with the mom, and has a soft purr for all his big size. He's also a bit of a drooler. He's never tried to bite or scratch her, but he does growl when he sees other people going by, and he growls at dogs too. He seems okay with other cats, though, doesn't fuss about them, not even the unneutered Mr. Peanuts we mentioned in yesterday's post. (Toby was quite the fighter, though, before he was snipped.) It's we who fuss about having Toby on our front step, and Nicki who redirects his aggression at Derry.

We really don't know if he'd do well as an indoor-only cat, and we don't know how long it would take to gain his trust. Canned food, Temptations and nip can do a lot. We wish we could say he'd be fine in another environment, but we can't guarantee that. We think he needs someone experienced with cats and who has the financial resources for his vet care (even just the routine stuff), as well as a house setup that would allow him to be separate from other animals, at least initially, something we also don't have.

If anyone would be willing to share this via social media, we'd be so grateful. And if anyone can help Toby with a home of his own, please, please contact our human at keas dot fuzzy dot tales at gmail dot com. Winters in Ontario are bitter, and though he (a) has his little house on our step and (b) obviously has some other place protected to go, as he's not been frostbitten over the past few years, the thought of him being there, especially during the harsh months, is unbearable.

The original is here: Fuzzy Tales: Toby really needs a home of his own